In collaboration with Elio Bidinost

Sonobotanics is still a widely unknown science; it studies plants whose life experience is predominantly in the auditory domain. Since the 1970’s Dr. Hortensia Audactor has carried out the core research in this area. Despite difficulties encountered in the publication of her results, she has collected a substantial body of research about the growth patterns, communication behavior, and other characteristics of these plants.

Recently, the field of Predictive Sonobotanics has been founded, attempting to create models of the plants with the aim of predicting the behavior of sonobotanic plants and to gain a deeper understanding of the subtleties in sonobotanic plant behavior.

The Periperceptoida Triquetrus Nutandis and Dependis are of the same family of plants, but have quite different methods of growing. While the first grows up from the ground and extends to the sky, the second grows downwards from structures it holds onto and extends towards the ground from there. 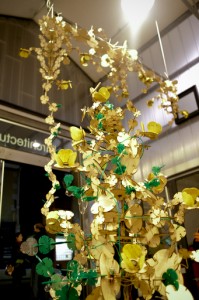 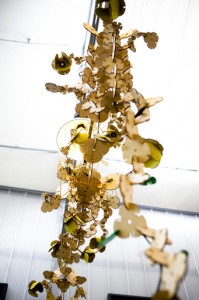 The two kinds of Triquetri are commonly found in nature near each other, as if living in a symbiotic relationship to each other. The sounds of the Triquetri develop in a similar way, and are accurately modelled using Lindenmayer’s system.

This relationship between the sounds was discovered first by Prof. Hortensia Audactor, as she did a frequency analysis of the recordings of the plants after an excursion to Southern Africa.